The Art of Memory for Weight Loss 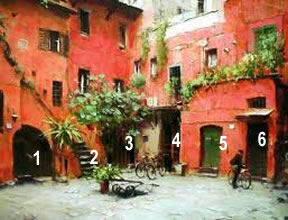 In November of  2013, I led a group of Raw Food Boot Camp members through a non-religious/non-new age visualization based off the ancient practice by Giodarno Bruno of memorizing long scripture and text. He used this idea, now called the Art of Memory, by visualizing different monks in different archways and doorways around their monastery. For each monk he would ascribe a length of text he needed to memorize. The assigned monk and doorway would spark a remembrance for him and as his mind wandered through the monastery and visualized each monk, the scripture would come back to him. It has now become this complex system for mnemonics, but I preferred it in its simplistic form.

When I was at a cusp in my life, deciding whether to continue Raw Food Boot Camp or to move beyond it, I used a modified version of the Art of Memory to sort things out, to remember who I was, to remember pivotal aspects of my life and things I held dear. I did not get the answers I was looking for, instead, I was reminded of how I got to where I was and that where I was, was exactly where I needed to be. It was life changing for me.

Not only did it show me that Raw Food Boot Camp had always been my calling, it also reminded me of the independent, strong child I was and how to get that back. It also helped me come to terms with some of my personality “flaws” (per my mother) and realize them as strengths.

I was so excited about it, that I shared what I had done with the women at Raw Food Boot Camp. Instead of using a monastery, I used the street where I lived as a child. Putting this emotional tie to it, helped me, but it derailed the others. Too much time was spent on finding the right place and right emotions that no one really benefited from it. It became an emotional tie up rather than an Art of Memory exercise to spark strong remembrances of the path we wish to live.

Failure is not something that deters me. I knew if I watered it down, took the emotions out of it, and presented it again, it might meet with better success.

It was an optional side project at camp. One they agreed I should redo next year. I admit, it wasn’t for everyone, but for those who did it, they seemed to get a lot out of it.

One of the things we all have to come to terms with to keep the weight loss off for good is that if we don’t find a way to change our outlook on ourselves, our food, and our exercise, the weight will never stay off.

I love successes, which this was, but even if it had failed, we would have learned better ways to help recover our true selves so we can live the best lives possible. There is nothing religious or new age about the Art of Memory. It is a proven method to remember things. We implant in the person what we want to remember. It is not used to dredge up old pains, not the way we use it. We just brought back remembrances of what we value in others and ourselves to the forefront of our minds to offer strength and reasoning as we forge our paths in life.

Leave a reply Click here to cancel the reply