What? How can I have her 70 and her 100 lbs gone before and afters?? Okay, there is a story behind this…

In October of 2009 Mona became a private client of mine (I no longer do this). From Oct of 2009 through March of 2010, she lost 65 lbs and decided she could do the rest on her own, so we ended our private sessions.

Here’s a collage I made for her own use back then. Her start weight was 260 lbs:

Mona returned with the vengeance of a woman scorned. By her fat suit that is. She told me from day one, this was going to be it for her, and she hasn’t backed down one bit.

In June, Mona was in a car accident and re-injured an old neck injury. Because of this she couldn’t keep up with the walking she had been doing. Yes, she was discouraged, but she never gave in to the cravings of old food habits. She refused to give up.

Now she’s walking again and was surprised at this Friday’s weigh in with 3.2 lbs gone in 2 days, pushing her over her 70 and 100 lb mark. So much for weight loss stopping when you get so close to goal!

Am I proud of her? There aren’t enough words. Her enthusiasm, her courage and her determination motivate so many at camp. 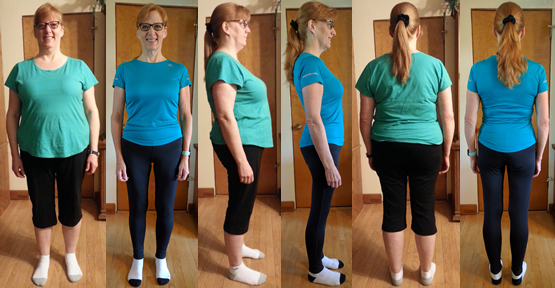 I will be talking to her about goal this afternoon. Not even I knew she was this close. This thin and beautiful!

So many people use the idea of what they will look like with 100 lbs gone. Will they be all saggy and gross. Well, Mona isn’t. How about we put her 260 lbs photos next to her  154.8 lbs and you can judge for yourself.

Are you as impressed as we are?

Mona does our Rawk Starz Diet with 2 Hours of Walking a Day!

Leave a reply Click here to cancel the reply